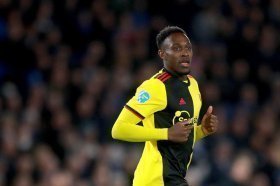 Championship side Watford have confirmed that Danny Welbeck has parted ways with the club through a mutual agreement.

Former Arsenal forward Danny Welbeck is struggling to find a new club owing to his current £100,000-a-week wage demands, a report from The Sun claims.

Arsenal have reportedly agreed personal terms with Lorient's Alexis Claude-Maurice, and they are now aiming to finalise a transfer fee for his services.

Belgium international Yannick Ferreira Carrasco has hinted that he could a return to European football this summer amid interest from the likes of Arsenal.

Liverpool and Arsenal have reportedly joined Manchester United in the race to sign French forward Moussa Dembele from Lyon.

Out of contract attacker, Danny Welbeck looks set to make a move to another Premier League side once his contract with Arsenal expires on June 1st, and it is understood that Everton is the new favourites to secure the England international's signature. Welbeck has admitted that he is interested in a transfer to Goodison Park in the past.

Everton have reportedly emerged as the front-runners to secure the signature of Danny Welbeck when his Arsenal contract expires this summer.