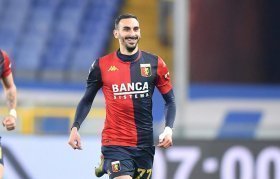 Chelsea have parted ways with Ike Ugbo and Davide Zappacosta, according to Fabrizio Romano.

Atalanta have reached an agreement with Chelsea for the permanent signing of Davide Zappacosta.

Chelsea defender makes the move to the Serie A

Chelsea have sanctioned the departure of Davide Zappacosta to Genoa on a season-long loan agreement.

Chelsea are reportedly planning to part ways with five first-team players during this summer's transfer window.

Davide Zappacosta could reportedly return to Chelsea in the coming days after sustaining a serious knee injury during a training session with loan club AS Roma.

Chelsea are reportedly reluctant to sanction the sale of defender Davide Zappacosta this summer unless a club is willing to match their £23m asking price.

Chelsea midfielder Danny Drinkwater has been given the opportunity to resurrect his footballing career after making the short-term loan move to Burnley.

Chelsea are reportedly in discussions with Turkish side Galatasaray regarding a season-long loan deal for midfielder Tiemoue Bakayoko.

Chelsea defensive duo want to leave the club this summer

Chelsea full-backs Marcos Alonso and Davide Zappacosta are said to be eyeing potential exits from the club during this summer's transfer window.

Chelsea make the trip to the Czech Republic to face Slavia Praque in the first leg of the Europa League quarter-final stage.

Chelsea will be aiming for their first away victory of 2019 when they make the trip to Sweden to face Malmo in the first leg of the Europa League round of 32.

Fenerbahce are reportedly keen on securing the signature of Danny Drinkwater from Chelsea after previously luring Victor Moses from the west London side.

Chelsea have confirmed the departure of Victor Moses to Turkish side Fenebahce on a temporary basis for the next 18 months.

Juventus are reportedly planning an attempt to lure Emerson Palmieri from Chelsea as they seek to bolster their squad for the second half of the season.

Chelsea defender Davide Zappacosta is reportedly nearing a switch to Lazio on a temporary basis with the obligation to buy at the end of the campaign.

Serie A side Lazio will reportedly make an attempt to pursue Davide Zappacosta from Chelsea, should they fail with an approach for Manchester United's Matteo Darmian.

Chelsea face Hungarian side Vidi on the road in their final Europa League group stage game on Thursday night.

Chelsea are reportedly planning to revive their transfer interest in Napoli's Elseid Hysaj when the transfer window reopens at the turn of the year.

Chelsea entertain PAOK in Thursday's Europa League encounter at Stamford Bridge. The Blues are already through to the knockout stage of the competition and they require just a solitary point from the remaining two matches to seal the top spot in their group.