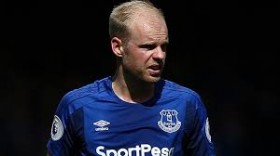 Besiktas are reportedly prepared to offer an escape route to Davy Klaassen following a poor debut season in the Premier League.

Everton manager Sam Allardyce has reportedly earmarked Arsenal attacker Theo Walcott as one of his prime targets for the January transfer window.

Arsenal have reportedly been put on alert with Everton forward Ademola Lookman eyeing a return to the English capital.

Tottenham Hotspur will reportedly have the advantage in the pursuit of Ross Barkley when the transfer reopens in the New Year.

Tottenham Hotspur are reportedly maintaining their interest in Everton midfielder Ross Barkley whom they hope to sign before tonight's 11 pm deadline.

Ajax defender Davinson Sanchez refused to board the team bus for the Dutch club's opening game of the new season on Saturday. The 21-year-old has been heavily linked with a move to Tottenham Hotspur and he is now looking to force his move to the Premier League.

Premier League holders Chelsea have identified Everton midfielder Tom Davies as a possible option to bolster their midfield ahead of the new season.

Everton have completed a surprise deal for Southampton defender Cuco Martina today, signing the full-back to a three-year contract at Goodison Park. Martina rejoins his old coach at the Saints, Ronald Koeman, as the Toffees continue a very busy summer on the transfer market.

Swansea City attacker Gylfi Sigurdsson is set to snub advances from Leicester City for a switch to Everton during this summer's transfer window.

Gylfi Sigurdsson has withdrawn from Swansea's pre-season tour of the United States and will complete his move to Everton in the coming days.

Everton boss Ronald Koeman has identified Christian Benteke as a potential candidate to replace Romelu Lukaku, who sealed his move to Manchester United earlier in the week.

The long-running transfer storyline concerning Michael Keane's future came to a close on Monday when he completed his move from Burnley to Everton in a deal that will see The Toffees pay up to £30 million.

Wayne Rooney expected to make return to Everton this summer

According to talkSPORT, Wayne Rooney is highly expected to rejoin Everton after the Toffees complete the signings of Sandro Ramirez and Michael Keane.