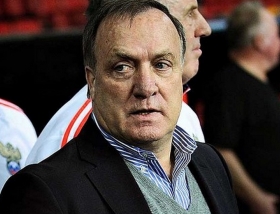 Former Rangers boss Dick Advocaat stars in 'Sunderland 'Til I Die' style Feyenoord documentary
Smith after he called time on a trophy-laden seven years to get to Everton. In the process, "The Little General" became the first foreign
03/09 19:16

Feyenoord manager Dick Advocaat has confirmed that Arsenal hold an interest in signing midfielder Orkun Kokcu but they have yet to make an official approach.

Netherlands international Virgil van Dijk has highlighted his commitment towards Southampton despite the continuous speculation surrounding his future.

Southampton centre-back Virgil van Dijk has hinted that he could pursue a fresh challenge away from St.Mary's in the New Year after his failed move to Liverpool in the summer.

Turkish giants Fenerbahce are prepared to offer an escape route to Memphis Depay in the New Year. The Netherlands international has fallen out-of-favour under Manchester United boss Jose Mourinho.

Turkish giants are prepared to sell Robin van Persie to Chinese side Hebei Fortune in the New Year. The Netherlands international is prepared to pursue a fresh challenge with his gametime significantly reduced this season.

New Sunderland boss Sam Allardyce is expected to go on a January spending spree in the quest to improve the club's performances.

Sunderland have reportedly appointed Sam Allardyce as manager on a two-year contract.

Sunderland have reportedly begun talks with Sam Allardyce regarding the vacant managerial post at the club.

Real Sociedad manager David Moyes has reportedly turned down a move back to the Premier League with Sunderland.

Sunderland have confirmed that Dick Advocaat has stepped down from his managerial role by mutual consent.

Dick Advocaat has hinted that he could call quits on his managerial role at Sunderland in the near future.

Sunderland winger Will Buckley has joined Championship side Leeds United on a three-month loan deal.

Dick Advocaat open to stepping down from Sunderland role

Sunderland boss Dick Advocaat has insisted that he will make way from the club, should they find a suitable candidate to carry them forward.

Will Buckley to join Leeds United on loan

Sunderland are expected to allow winger Will Buckley make a temporary move to Leeds United until the New Year.

Sunderland boss Dick Advocaat is pondering over a move for free-agent Kevin Nolan, according to reports.

Sunderland boss Dick Advocaat has revealed the club have pulled out of a deal for Napoli midfielder Jonathan de Guzman.

Netherlands international Jonathan de Guzman will join Premier League side Sunderland on a season-long loan, according to an Italian source.

Sunderland are reportedly keen on a summer deal for Napoli midfielder Jonathan Guzman.