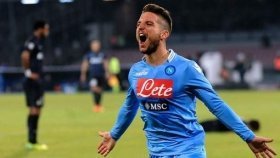 Tottenham Hotspur could compete with Arsenal in the race to sign Dries Mertens during the summer transfer window.

West Ham United and Tottenham Hotspur could reportedly compete for the services of Arkadiusz Milik from Napoli this summer.

Chelsea to miss out on signing Belgian forward?

Chelsea could reportedly miss out on the signing of Napoli star Dries Mertens, given the Belgian wants to remain in the Serie A next season.

Chelsea manager Frank Lampard has reportedly been in direct contact with Dries Mertens after following the Napoli attacker on Instagram earlier this month.

Spanish winger Pedro remains hopeful of extending his stay with Chelsea beyond the ongoing campaign, a report from ESPN claims.

Chelsea have received a boost in signing Lucas Vazquez from Real Madrid with the Spaniard admitting that he could consider a move to the Premier League.

Chelsea have emerged as the favourites to sign Dries Mertens from Napoli when the campaign reaches its conclusion.

Belgium international Dries Mertens has opened the door to join Chelsea as he favours a move to the English capital this summer.