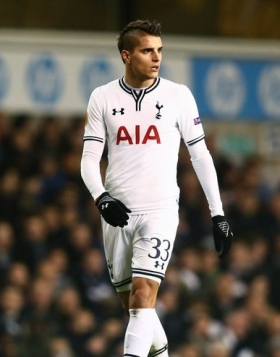 Sevilla vs Man City: four familiar faces to look out for in guide to the opposition
Devil Adnan Januzaj joined the club last month. Other one-time Premier League stars include Erik Lamela and Suso, formerly of Liverpool.
06/09 12:39

Liverpool have been tipped to land the signature of AS Roma captain Lorenzo Pellegrini during the summer transfer window.

Tottenham Hotspur manager Jose Mourinho will need to offload Erik Lamela before he can secure the services of Willian this summer.

Tottenham Hotspur striker Harry Kane has said that it is good to be back to winning ways after his side's 2-1 win over Brighton and Hove Albion in the Premier League on Saturday.

Tottenham Hotspur player Erik Lamela has said that his side are disappointed after losing their opening Champions League game against Inter Milan on Tuesday.

Liverpool boss Jurgen Klopp has praised his side's performance in their 2-1 win over Tottenham Hotspur on Saturday, describing it as "very good".

The FA Cup semi-final draw was made on Sunday evening after it was confirmed that the final four of this year's competition will be made up of four Premier League teams; three of the top six and a relegation struggler.

Inter Milan manager Luciano Spalleti has identified Lamela as a key player to make his 4-2-3-1 system work for next season and is ready to splash the cash on the Argentine.

Tottenham Hotspur boss Mauricio Pochettino will reportedly push for a deal for Newcastle United's Florian Thauvin when the transfer window reopens in the summer.