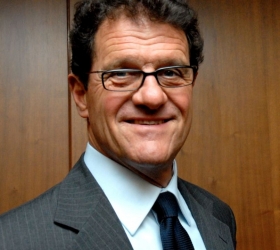 Fabio Capello reveals cheeky transfer attempt to sign Lionel Messi for Juventus and the stern response from Barcelona
and they need a big rebuild. Capello believes Mancini, the former Manchester City manager, is the right man to lead his nation and should
01/06 11:40

Manchester United are slumping lately as they are in the 10th position in the PL standings. The Red Devils have picked up just 13 points from 11 matches, with only one win in their last 5 games.

A true great or underachiever? A look back at Wayne Rooney’s international career

It is one of the most perplexing mysteries in the world of football. The career of Wayne Rooney is undoubtedly one of the sport’s finest, as he burst into the spotlight at the age of 16 and solidified himself into his country’s record books as one of the most talented and prolific goal scorers to pull on the white jersey of the Three Lions.

Ex-England manager Fabio Capello has revealed his desire to take over the managerial reigns at Chelsea.

5 reasons to get Brendan Rodgers as next England manager

With Roy Hodgson looking at signing a contract extension to take him into the next World Cup, lets look beyond this (as it may not be possible to get too excited before he is gone) to the next potential manager. Here are 5 reasons why it would be prudent to include Brendan Rodgers in the thinking.

Is Roy Hodgson the right man for England?

Ahead of England's opening Euro 2016 qualifier against Switzerland, we discuss whether Roy Hodgson is the right man to take the national team forward.

Algeria secure point to progress to 2nd round

Algeria qualified for the second round of the World Cup for the first time in their history after drawing 1-1 with Fabio Capello's Russia.

Russia captain Roman Shirokov will not feature in the World Cup this summer with an achilles tendon injury.

England's Left Side of Midfield - The Modern Dilemma

With the World Cup in Brazil a matter of weeks away, Roy Hodgson will have a good idea of  who will be on that much coveted flight to the land of sun, samba and football.

Fabio Capello has extended his contract with Russia till the summer of 2018. The 67 year old took charge of the team in 2012.