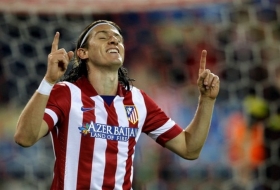 How Atletico Madrid could have lined-up by NOT spending £113m on Joao Felix and buying Bellerin, Aguero and Lacazette
Filipe Luis, Atleti had been linked with Chelsea's Marcos Alonso. But after it was made clear their transfer ban would be...
04/07 08:00

Spanish giants Atletico Madrid are reportedly confident of securing the signature of defender Marcos Alonso from Chelsea this summer.

Chelsea defender Marcos Alonso has reportedly indicated Atletico Madrid that he wants to join the team during this summer's transfer window.

Atletico Madrid are reportedly looking into a summer deal for Chelsea's Marcos Alonso as they seek to reinforce their options on the left side of the backline.

Arsenal are reportedly looking into a move for Brazilian defender Filipe Luis whose contract with Atletico Madrid is due to expire at the end of the season.

Brazil head coach Tite has confirmed that Marcelo has returned to full fitness ahead of Friday's World Cup quarter-final versus Belgium.

Belgian international Eden Hazard has been handed his first Champions League start of the season against Atletico Madrid tonight. The attacker has largely been used as a substitute this term with Antonio Conte cautious after his injury comeback.

Chelsea striker Diego Costa has hinted that he could return to Atletico Madrid in the near future.

Augsburg star Baba Rahman will make a move to Chelsea next week after the young Ghanaian passed a medical. The defender is wanted as a replacement for Filipe Luis, who departed the Blues to return to former club Atletico Madrid.

Chelsea have reached an agreement with Augsburg over the signing of defender Abdul Baba Rahman, according to reports.

Augsburg defender Baba Rahman has reportedly agreed on a summer move to Chelsea, according to his agent.

Chelsea are exploring the possibility of signing up Tottenham Hotspur defender Danny Rose during this summer's transfer window.

Chelsea are expected to announce their third signing of the transfer window after they reached an agreement to sign highly-rated defender Abdul Baba Rahman from German side Augburg.

Chelsea to move for Alex Telles?

Chelsea could consider a move for Galatasaray full-back Alex Telles, The Sun reports.

Atletico Madrid are expected to announce the signing of defender Filipe Luis in the coming days having agreed a £15m for his transfer from Chelsea.

Chelsea will make a move for Augburg defender Abdul Baba Rahman this week after finally agreeing the sale of Filipe Luis to Atletico Madrid.

Chelsea are expected to allow defender Filipe Luis make his way back to La Liga with Atletico Madrid, according to reports.