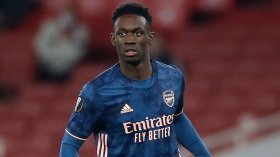 Folarin Balogun will move to Ligue 1 for the 2022/23 campaign after being informed that he would not be needed for Arsenal's campaign this Premier League season. Reims have agreed to pay the entirety of Balogun's salary for the temporary spell, and is a huge coup for the club considering Balogun originally mentioned as a long term successor for duo Lacazette and Adebayor.

Reims are interested in signing Arsenal striker Folarin Balogun as they seek to find a replacement for Hugo Ekitike.

Arsenal manager Mikel Arteta has been scouring his homeland for attacking talent, and his scouting network have sent a glowing report back to North London on the progress of 21-year-old Villarreal striker Fer Nino. The player, who currently is on loan at Real Mallorca, has caught the eye this season despite his club sitting in 18th place in La Liga.

Arsenal have been tracking the progress of Eintracht Frankfurt's attacker Ali Akman. The 19-year-old, who is currently on loan with Eredivisie side NEC Nijmegen, has caught the eye in the Netherlands with some excellent attacking displays and the Gunners' scouting network have identified the Turkish under-21 international as a hot prospect for the future.

Arsenal defender on his way to Udinese

Arsenal defender Pablo Mari is reportedly on the verge of joining Serie A club Udinese on loan.

Arsenal have asked for the postponement of the north London derby against Tottenham Hotspur on Sunday evening.

Arsenal face Nottingham Forest on the road in this evening's FA Cup third round tie. The Gunners are missing several players due to international duty and Covid-19, but should be favourites to progress.

Arsenal striker Folarin Balogun is reportedly on the cusp of joining Middlesbrough on loan.