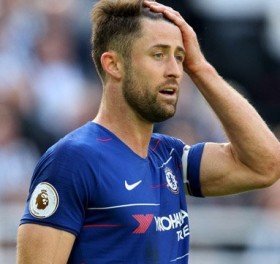 Former Chelsea captain Gary Cahill has said that Liverpool can't count Manchester City out of the Premier League title race despite their strong start to the season.

Crystal Palace have reached agreement with Gary Cahill to sign the former Chelsea defender on a free transfer. Cahill will arrive at Roy Hodgson's side on a 2 year deal and will add valuable experience to a squad that has been depleted in the transfer window.

Arsenal have tabled their first offer to sign free agent Gary Cahill. The 33-year-old defender, whose contract with former club Chelsea expired last season, has received offers from Crystal Palace, Aston Villa and now the Gunners are the most recent option that the former England international has to pick from.

Former England defender Danny Mills has urged Manchester United to pursue the services of Gary Cahill, who is available on a free transfer after his release from Chelsea.

Leicester City are planning an approach to sign former Chelsea skipper Gary Cahill as they face the prospect of losing Harry Maguire during the current transfer window.

Premier League sides Aston Villa and Arsenal are battling to sign defender Gary Cahill on a free transfer. Former Bolton Wanderers and Chelsea centre-back Cahill is available having failed to reach an agreement at Stamford Bridge.

Arsenal are reportedly one of the clubs in the running to secure the services of defender Gary Cahill following his release from Chelsea this month.