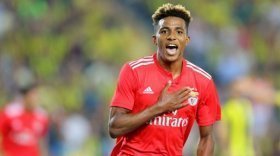 ‘Miracle transfer’, ‘dream-like’: Club chief can’t believe he’s signed Tottenham man
. “Gedson Fernandes was a miracle transfer. Fernandes could not sign for any other club from Turkey. It is a dream-like transfer,” says
12/02 13:00

Fernandes's arrival at Spurs set to hasten the departure of Eriksen

Jose Mourinho has made his first signing since becoming Spurs manager with the capture of Portuguese midfielder Gedson Fernandes from Benfica. The 21-year-old arrives in London on an initial 18 month loan deal with a view to making the move permanent at the end of the 2020-21 campaign.

West Ham beat Chelsea to the signing of Portuguese starlet

West Ham United have reportedly agreed a deal in principle to sign midfielder Gedson Fernandes from Benfica during the winter transfer window.

Manchester United are reportedly looking into a move for midfielder Gedson Fernandes, who is presently in the ranks of Portuguese side Benfica.