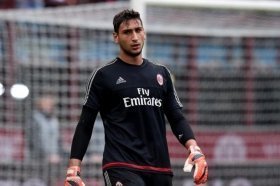 TOP MEN The 100 most-valuable stars in the world revealed with Harry Kane 30th and no room for Cristiano Ronaldo or Lionel Messi
, PSG’s Gianluigi Donnarumma is the top goalkeeper in the world. And Premier League-linked Darwin Nunez is rated as the globe’s best player
06/06 20:54

Manchester United goalkeeper David de Gea has no plans of leaving the club during this summer's transfer window.

German goalkeeper Bernd Leno could pursue a fresh challenge away from Arsenal during the summer, Football.London claims.

Chelsea have been handed a boost in signing AC Milan goalkeeper Gianluigi Donnarumma on a free transfer this summer.

Manchester United could reportedly replace David de Gea with Gianluigi Donnarumma, who may be available on a free transfer this summer.

Chelsea could be open to swapping Kepa Arrizabalaga in a potential deal to sign Gianluigi Donnarumma from AC Milan this summer.