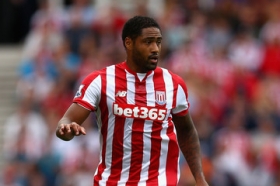 ‘Liverpool may need loans as top talent won’t want move’ – Johnson warns of transfer struggles for Klopp
Liverpool may have to dip into the loan market during the January transfer window says Glen Johnson, with the former Reds defender doubting
18/01 12:22

Former Chelsea and Liverpool star Glen Johnson believes the Blues could easily break into the top four of the Premier League this season with both Manchester United and Tottenham Hotspur struggling for form.

Spanish champions Barcelona will look to seal a cut-price deal for Darijo Srna in the winter transfer window. The Croatia international is prepared to end his long-term association with Shakhtar Donetsk.

Stoke City are looking to increase their full-back potential in January by signing Linus Wahlqvist.

Stoke City defender Glen Johnson has been linked with a surprise switch to Barcelona in the January transfer window. The Catalan giants are on the search for a new right-back with Aleix Vidal set to leave Camp Nou.

Stoke City - What is going wrong?

Stoke City are a side in real trouble. What started as a downslide at the back end of the 2015/16 season has continued, even spiralled, into a full blown disaster. After picking up just nine points from the last ten games of last season, they’ve secured just three in seven games at the start of this campaign. Stoke now have won just two of their last seventeen games, scoring just sixteen, but conceding an alarming thirty-eight goals in the process.

Atletico Madrid defender Javier Manquillo has linked up with French side Marseille on a season-long loan.

Stoke City are understood to have signed up free agent Glen Johnson, according to reports.

Former Liverpool defender Glen Johnson will sign a three-year contract with Stoke City once he has successful medical.

Former Liverpool full back Glen Johnson is in talks with Premier League side Leicester City, following his release from Anfield. Johnson is open to a move to Nigel Pearson's Foxes, according to reports this morning.

Liverpool have had an offer rebuffed from Southampton for defender Nathaniel Clyne.

Mario Balotelli is one of among the eight players expected to be offload from Liverpool in the summer.

Liverpool could make a move for Burnley defender Kevin Trippier this summer.

Turkish giants Galatasaray are eager to land the services of Liverpool defender Glen Johnson this summer.

England international Glen Johnson has revealed that he will leave Liverpool once his contract comes to a close this summer.

Liverpool defender Glen Johnson is reportedly open to the prospect of joining AS Roma at the end of the season.

Liverpool will consider an offer for Newcastle United defender Daryl Janmaat at the end of the season, according to The Star.