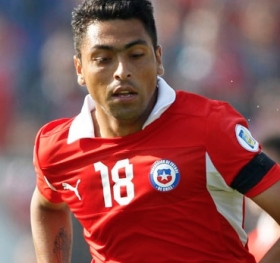 Chile’s Gonzalo Jara escapes red for ELBOWING Germany’s Timo Werner in the face despite use of VAR
that the jury is out on the new technology. Keep up to date with ALL the latest transfer news and speculation with our live transfer feed
02/07 22:21

Germany added to their under-21s' European Championships success by beating Chile in the final of the 2017 Confederations Cup to lift the trophy for the first time. A single goal was enough to separate the two sides in the final that was being held in Russia's St Petersburg Stadium.

Chile defender Gonzalo Jara has joined Mainz on a free transfer, signing a two-year deal with the German club.

World Cup hosts Brazil qualified for the quarter-finals at the World Cup following their penalty shoot-out win over Chile.