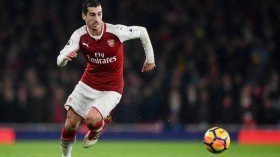 Barcelona crash out at Champions League as Laporta plans left in ruins
... to a double from Edin Dzeko, plus goals from former Manchester United stars Henrikh Mkhitaryan and Romelu Lukaku, sending Barcelona out of ...
26/10 19:35

Man Utd defender in talks with Lyon and Marseille?

Manchester United defender Eric Bailly is determined to leave the club this summer, according to But! Football.

Roma midfielder Henrikh Mkhitaryan has emerged as a potential transfer target for Juventus this summer.

Arsenal have confirmed the departure of Henrikh Mkhitaryan on a permanent basis to AS Roma after they terminated his contract by mutual consent.

Arsenal are reportedly open to parting ways with Ainsley Maitland-Niles when the current season reaches its conclusion.

Atletico Madrid have made it clear to Arsenal that they won't sell Thomas Partey this summer unless the £44m release clause in the midfielder's contract is triggered.

Arsenal have reportedly joined Borussia Dortmund in the race to sign Moussa Diaby from Bayer Leverkusen.

Arsenal are reportedly the favourites to land the signature of Orkun Kokcu from Feyenoord during the next transfer window.

Atletico Madrid midfielder Thomas Partey has made it clear that he wants to join Arsenal despite the fresh interest from Paris Saint-Germain.

The representative of Henrikh Mkhitaryan has insisted that the forward has not sent any message to Arsenal regarding a possible summer departure.

Armenia international Henrikh Mkhitaryan has reportedly told Arsenal that he wants to secure a permanent move to AS Roma this summer.