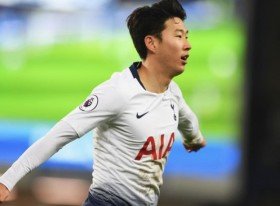 Player ratings – Heung Min Son a 9 but midfielder gets a 5 for Tottenham v Burnley
in possession. Troy Parrott N/A – A moment to cherish for the 17-year-old, who was handed his Premier League debut late in the...
08/12 16:33

Tottenham forward Son Heung Min has been ruled out for several weeks after picking up an arm injury against Aston Villa.

Tottenham Hotspur manager Mauricio Pochettino vetoed the 32 million sale of Korean forward Son Heung Min this summer, preventing the 24-year-old from returning to the Bundesliga, according to reports in Germany.