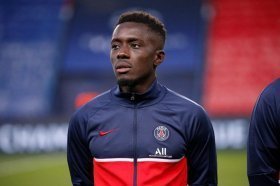 Newcastle United are keen on a reunion with Paris Saint-Germain midfielder Georginio Wijnaldum.

Manchester United missed out on landing the signature of Idrissa Gueye from Paris Saint-Germain over the summer.

Manchester United are open to sanctioning the sale of Paul Pogba after he turned down a new contract, The Mirror reports.

Paris Saint-Germain have reportedly made contact with Paul Pogba's agent Mino Raiola to register their interest in the Manchester United midfielder.

Chelsea have reportedly added Idrissa Gueye and Julian Draxler to their transfer shortlist ahead of the January transfer window.

Manchester United are reportedly plotting a mid-season deal for midfielder Leandro Paredes, who has gone out-of-favour at Paris Saint-Germain this term.

Bournemouth midfielder Lewis Cook appears to be a top transfer target during the January transfer window for a number of Premier League sides, with the likes of Everton and Wolves both rumored to have expressed interest in the 22-year-old. Cook, who has forced his way in to Eddie Howe’s side in recent months, is seen as one of Europe’s best up and coming centre midfielders.