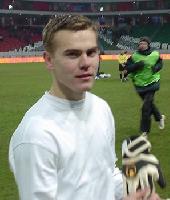 CSKA Moscow keeper Igor Akinfeev records first Champions League clean sheet in 11 years
goals we have conceded in the tournament." Keep up to date with ALL the latest transfer news and speculation with our live transfer feed
26/07 09:45

Former Manchester United defender, Rio Ferdinand has reacted to Spain's defeat to Russia in the second round of the ongoing FIFA World Cup in Russia, urging them to change their style of possession football.

Host nation Russia is hoping to get their campaign off to a flying start as they take on Asian giants Saudi Arabia in the tournament opener.

Manchester United continued their strong start to the season with a 4-1 thrashing of CSKA Moscow in Russia, with Martial putting in a stunning performance.

Chelsea are rumoured to be interested in signing CSKA Moscow goalkeeper Igor Akinfeev as they prepare for a long-term replacement for Czech Republic international Petr Cech.

Manchester United are reportedly ready to test the resolve of CSKA Moscow's goalkeeper, Igor Akinfeev. The Russian international is regarded as one of the best goalkeeper's in Europe, and Sir Alex Ferguson is looking for a long-term successor for Edwin van der Sar.

To many, Igor Akinfeev will already be a household name. However, the CSKA Moscow can certainly get even better as he looks set to make a move away from Russia at some stage in the near future. Chelsea, Inter Milan and Lyon have all been linked with the Russian number 1.

Guus Hiddink has named a 25 man preliminary squad for Euro 2008. The squad for the tournament will consist of 23 players, but Russia are still yet to play two friendlies against Serbia and Lithuania.

CSKA Moscow and Russian international goalkeeper Igor Akinfeev is being linked with a move to Arsenal in the January transfer window. The talented keeper is touted as one of the best young goalkeeping talents in Europe.

Man Utd are interested in signing Russian international goalkeer Igor Akinfeev from CSKA Moscow. Alex Ferguson is on the market for a long-term replacement for Edwin van der Sar.