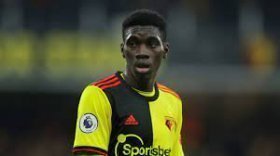 Everton: Ismaila Sarr would’ve been the dream Gordon heir
... , Everton and Dyche might have found success with a transfer. With such an avenue now cordoned off and with no means of salvaging, Everton ...
02/02 08:35

Everton are to make a January move for 24-year-old Senegal international Ismaila Sarr. Toffees' coach Frank Lampard wants to add strength in depth to his attack, and the talented winger is available for a fee of around £27 million from Championship outfit Watford.

Leeds United will wrap up a deal to sign Senegal winger Ismaila Sarr from Watford this weekend, with the Elland Road outfit paying a reported £24 million to secure the former Metz and Rennes attacker.  Sarr scored 24 goals in 91 games for Watford and was a hugely popular player with the club's fans.

Manchester United could make a renewed attempt to sign Ismaila Sarr from Watford during this summer's transfer window.

Liverpool and Manchester United could reportedly battle it out for the signature of Ismaila Sarr during the January transfer window.

Liverpool and Manchester United are among the clubs interested in signing David Brooks from Bournemouth before Friday's domestic transfer deadline.

Crystal Palace are reportedly prepared to shatter their transfer record as they seek to sign Ismaila Sarr from Watford before the domestic transfer deadline.

Watford are open to the idea of selling Ismaila Sarr to Manchester United before the domestic transfer window closes on October 16.