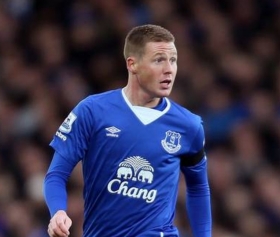 Roy Hodgson delivers transfer ultimatum to Crystal Palace over his Selhurst Park future
was made permanent, James McCarthy from Everton for £8.5m, and Gary Cahill from Chelsea on a free transfer....
04/02 22:38

Chelsea has made nine changes to his lineup for tonight's League Cup clash against Everton.

Southampton will reportedly end their five-year association with Argentine goalkeeper Paulo Gazzaniga, who is attracting plenty of transfer interest this summer.

Premier League duo Manchester United and Everton could reportedly battle it out for the signature of Inter Milan midfielder Marcelo Brozovic in the summer.

Everton boss Ronald Koeman is reportedly eyeing a move for Middlesbrough midfielder Marten de Roon as he seeks to rebuild his squad ahead of next season.

Koeman blames his own player for inury

Everton manager Ronald Koeman has blamed James McCarthy for the injury that he picked up whilst on international duty with the Republic of Ireland and also the ROI manager Martin O'Neil.

Celtic will reportely revive their interest in Everton midfielder James McCarthy in the January transfer window. The Republic of Ireland was part of the Toffees' side which earned a hard-fought win over Arsenal in midweek.

West Bromwich Albion boss Tony Pulis has earmarked Everton's James McCarthy as his prime target for the January transfer window. The Republic of Ireland is no longer a regular at Goodison Park.

Everton midfielder James McCarthy could be the subject of interest in the January transfer window after Alan Pardew hinted to reporters that he could make a move for the player. McCarthy has been linked with a move south in a deal worth around 8.8m.

Everton boss Ronald Koeman is prepared to finance a loan agreement for Manchester United outcast Bastian Schweinsteiger. The German has yet to kick the ball for the Old Trafford side this season.

Everton are considering the sale of James McCarthy when the transfer windows reopens in January. Ronald Koeman has already identified potential replacements for the midfielder.

Sevilla are willing to cash in on Steven N'Zonzi in January, provided any club matches his £35m valuation. The Frenchman was a transfer target for Leicester City in the summer.

James McCarthy up for sale

Everton boss Ronald Koeman has decided to cash in on James McCarthy when the transfer window reopens in the New Year. The 25-year-old has been overlooked since his injury at the start of the campaign.

Crystal Palace are considering a contract offer for former Arsenal midfielder Mathieu Flamini. The Frenchman is currently a free agent after he was released from the Gunners in June.

Crystal Palace boss Alan Pardew is hopeful of securing a deal for Everton's James McCarthy before the transfer deadline. Celtic and Newcastle United are also in the running for his signature.

Celtic boss Brendan Rodgers is prepared to lodge a loan approach for Everton midfielder James McCarthy. The Irishman is weighing up his options with manager Ronald Koeman option to choose Gareth Barry and Idrissa Gueye for the central midfield role.