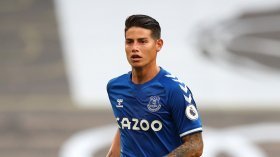 Former Arsenal playmaker Aaron Ramsey could return to the Premier League during the winter transfer window.

Arsenal and Everton have been credited with an interest in signing Barcelona midfielder Philippe Coutinho this summer.

Everton duo James Rodriguez and Richarlison are weighing up exits after the departure of manager Carlo Ancelotti.