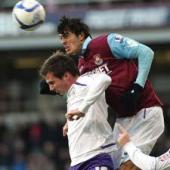 Manchester City short of defensive options for Crystal Palace clash
from the one that defeated Aston Villa 3-1 in their last Premier League outing. James McArthur (groin) and James Tomkins both remain in
26/08 18:06

Crystal Palace boss Sam Allardyce has dismissed suggestions that his side could move for the services of Chelsea defender John Terry in the summer.

Southampton and Napoli have emerged as potential contenders to pursue the services of Liverpool defender Mamadou Sakho. The France international is currently on a short-term loan with Crystal Palace.

Liverpool striker Christian Benteke has settled personal terms with Crystal Palace ahead of his proposed switch this summer. The Belgian was restricted to just 14 league starts for the Reds last term.

Crystal Palace have come up with a fresh approach for Liverpool striker Christian Benteke after their initial &pound25m bid was rejected last week.

Newcastle United in for James Tomkins?

Juventus defender is wanted by Premier league side West Ham United on loan. The 27 year old has spent last two years away from the Bianconeri at Catania and Bologna.