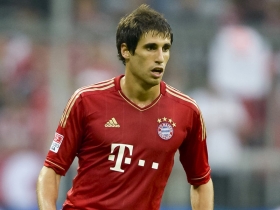 £15m target compared to Javi Martinez would be a huge upgrade on Vallejo at Wolves - opinion - FootballFanCast.com
… Wolverhampton Wanderers look set to be active in the January transfer window. Previous reports from Birmingham Live suggested...
27/11 10:10

Bundesliga giants Bayern Munich are reportedly set to join the pursuit for Germany's World Cup winner, according to a report.

Pep Guardiola has told reporters that he will be looking to signa  replacement for injured Spaniard Javi Martinez. The player will be missing until the end of the year.

Arsenal are reportedly inching closer to sealing a deal for Bayern Munich midfielder Javi Martinez this summer, according to German daily Bild.

Arsenal and Manchester United have been reportedly alerted on the availability of one of the finest players from the Bundesliga this summer.

Bilbao to offer new contracts to four of their top players

Martinez to stay at Bayern Munich

Bayern Munich manager Pep Guardiola has come out and quashed rumours of midfielder moving to Real Madrid. The 25 year old arrived in Germany from Athletic Bilbao in a record Bundesliga deal in the summer of 2012.

Reports suggested that the Champions League winners Bayern Munich were in the market in the search for a new centre-back following their 4-2 German Super Cup final defeat to arch rivals Borussia Dortmund.

Guardiola speaking at a presentation before the Audi Cup in Munich, said that he was satisfied with his defensive outlook. Bayern have the option to drop Spanish International Javi Martinez back now, following the signing of Thiago Alcantara to fill a similar holding midfield role to the one he had last term.

"He's not coming to Munich," he said. "We've got four or five central defenders.

"There is no truth to the speculation."

Bundesliga side Wolfsburg are planning to make a swoop for out of favor Bayern midfielder Luiz Gustavo this summer.

Arsenal to bid for Luiz Gustavo?

The Gunners have been linked with Brazilian star Luiz Gustavo as the Champions League winners Bayern Munich are willing to allow their midfielder to move. The North London club are reportedly set to make a bid for the player with a fee in the region of £8m according to the Metro.

Can Spain win a fourth international trophy in the 2014 World Cup in Brazil? With the qualifying matches for the finals well underway, punters and football fans are busy trying to answer this question. It has to be said, the Spanish national side has everything to lose. As the only team in history take home the silverware in three consecutive major tournaments (Euro 2008, World Cup 2010 and Euro 2012), it seems La Furia Roja may be unstoppable.

Spanish giants Barcelona are the latest team to have been linked with a move for Athletic Bilbao starlet Javi Martinez. The 23-year-old has been monitored by Roberto Mancini's side, and Barca could offer a massive 15 million package to secure his signature.

Liverpool not after Martinez

Rafa Benitez has rejected claims that he is chasing Athletic Bilbao's defender Javi Martinez. There was speculation that Liverpool are set to snap up the 19 year old, who has a £17m release clause at the Bilbao club.