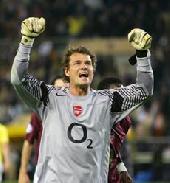 Aaron Ramsdale given Arsenal No1 shirt after Bernd Leno leaves for Fulham
will be the seventh Arsenal goalkeeper to wear the No1 shirt in the Premier League era, following the likes of David Seaman, Jens Lehmann
03/08 12:24

Over the years, the Premier League has thrown up some tantalising teams and many pundits will argue that Pep Guardiola’s Man City are emerging as the next team to fit the bill. Currently unbeaten in the league this season, the Citizens are playing some of the best football we’ve witnessed in England, and many are understandably starting to question whether they can emulate Arsenal’s historic Invincibles season.

Former Arsenal and Germany goalkeeper Jens Lehmann has criticised some of the current Gunners players, saying that they must take some of the blame for the club's poor season and that they owe Arsene Wenger a lot.

English goalkeepers have been the subject of plenty of flak in recent decades, but could this be the best generation of goalkeepers for many years?

Jens Lehmann: ' The Gunners paid too much for Ozil'

Former Arsenal goalkeeper Jens Lehmann has insisted that the Gunners had paid too much to sign Mesut Ozil from Real Madrid.

Reports suggest that Julio Cesar may snub Arsenal for a move to AS Roma. As for now it seems Arsenal will be stuck with their own homegrown lot of goalkeepers for yet another season.

The Daily Telegraph reports this morning that Arsene Wenger is considering a shock move for Arsenal legend Thierry Henry for the month of January, when forwards Marouane Chamakh and Gervinho both head off for the African Cup of Nations.

Arsenal bid for Shay Given?

Arsenal boss Arsene Wenger may be set to finally resolve his goalkeeping crisis with a bid for Man City's out of favour goalkeeper Shay Given in January. Stories suggest that the Gunners will bid 5m GBP to bring the Irishman to the Emirates.

Bayern Munich midfielder Bastian Schweinsteiger has put some of the Premiership's top clubs on red alert after revealing that he would be interested in making the move to England at some stage of his career.

"I will give my life" - Lehmann

German goal keeper Jens Lehmann declared that he will give his life to win the European Championship. Germany is inching to reach their sixth time in the Euro final, the semi-final match against a "limping" Turkey might be an easy walk.