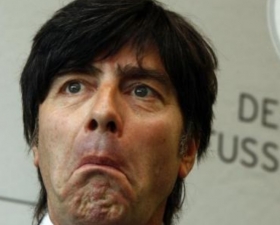 Liverpool boss Klopp tells German fans: Don't write off Low
Liverpool boss Jurgen Klopp insists Joachim Low should remain in charge of Germany. Klopp has been mentioned as a replacement for the under
06/12 11:59

German international midfielder fears for his place at Euro 2020

German international midfielder Emre Can has asked for crisis talks with Juventus as fears grow that his participation at Euro 2020 could now be at risk.

Timo Werner has said that his side 'deserved' their 2-1 win over Sweden in group F of the ongoing FIFA World Cup in Russia.

The age of the supercoaches

For some spectators watching the World Cup this summer, they’ll be doing so with one eye on the action on the field, and another focused on the technical areas.

Emre Can out for the season and could miss World Cup

Emre Can looks set to miss the remainder of the club season with Liverpool through injury and could also miss out on this summer's World Cup in Russia. With his contract expiring at the end of the season and numerous clubs showing interest in him, the Germany international may have made his last appearance as a Liverpool player.

Zinedine Zidane is a Real Madrid legend. As a player he showcased his talent at the Santiago Bernabeu, and now he sits in the dugout as manager of the world famous club. The last minute defeat against Barcelona in El Clasico this week has put Zidane under pressure however, and he could be replaced in the summer.

German midfielder Toni Kroos is set to be offered a contract extension by Real Madrid, according to reports in Spain.

Liverpool could be set to go head to head with Arsenal over the signing of Valencia defender Shkodran Mustafi, according to reports in Spain.

Valencia will allow Arsenal target Shkodran Mustafi to leave if they received a bid of £26 million, according to reports.

Arsenal closing in on Mustafi

Arsenal are on the verge of sealing a £28 million deal to sign Shkodran Mustafi from Valencia, according to reports.

Arsenal yet to make Mustafi offer

Arsenal have not yet made a firm offer for Valencia defender Shkodran Mustafi, according to reports in Spain.

Arsenal could complete a sensational double swoop for both Shkodran Mustafi and Jonny Evans before the season starts, according to reports.

Arsenal set to move for Draxler

Arsenal could be set to make a move for German midfielder Julian Draxler, according to reports in Germany.

Manchester City are set to complete the signing of 20-year-old German winger Leroy Sane, having reached an agreement with Schalke 04 over a transfer fee.

Are Arsenal about to make Mustafi move?

Arsenal could be set to make a bid for Valencia defender Shkodran Mustafi, as manager Arsene Wenger looks to bolster his defensive options, according to reports.

Manchester City could soon be set to seal a swoop for Schalke 04 winger Leroy Sané after the player has expressed his desire to leave the German club, according to reports.