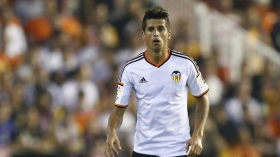 Manchester City are looking to include Joao Cancelo in a player plus cash deal for Inter Milan defender Milan Skriniar, claims the Italian outlet Sempreinter.

Juventus are prepared to offer Mario Mandzukic as part of a proposal to sign defender Matteo Darmian from Manchester United this summer.

Manchester City are set to go head-to-head with Manchester United in the race to sign defender Joao Cancelo from Juventus at the end of the season.

Manchester United are reportedly planning to make a double move for Juventus' Joao Cancelo and Napoli's Kalidou Koulibaly in the summer.

Manchester United are reportedly plotting an approach to sign Joao Cancelo from Juventus when the current campaign comes to a close.

Manchester United boss Jose Mourinho is unlikely to come in the way of Matteo Darmian this winter, should the club receive a suitable offer to sanction his sale.

Manchester United manager Jose Mourinho is reportedly keen on pursuing a deal for compatriot Joao Cancelo from Valencia at the end of the season.

Chelsea are reportedly in pole position to sign Valencia's Joao Cancelo after Tottenham Hotspur pulled out of the race for his services. The Premier League champions have recruited the likes of Willy Caballero, Antonio Rudiger, Tiemoue Bakayoko and Alvaro Morata for a combined £127.5m this summer.

Spanish champions Barcelona have reportedly finalized a £25m deal with Valencia for the signature of Joao Cancelo. The Portugal international will link up with the club at the end of the season.

Spanish champions Barcelona will look to seal a cut-price deal for Darijo Srna in the winter transfer window. The Croatia international is prepared to end his long-term association with Shakhtar Donetsk.

Southampton defender Cedric Soares is reportedly the subject of interest from Barcelona ahead of the winter transfer window.

Barcelona are reported to have ended their interest in Arsenal's Hector Bellerin with Joao Cancelo being their latest target. The 22-year-old currently plys his trade for Spanish side Valencia.