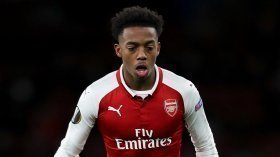 Allan Saint-Maximin reveals his prediction to Joe Willock before dramatic winner at Burnley
after scoring Newcastle United's second goal against Burnley at Turf Moor on April 11, 2021 Get the latest NUFC updates, transfer and
11/04 20:00

Arsenal are prepared to consider the sale of Reiss Nelson when the transfer window reopens during the summer.

Arsenal could part ways with both Alexandre Lacazette and Eddie Nketiah when the transfer window reopens this summer.

Newcastle United have completed the signing of Joe Willock on a short-term loan deal from Arsenal.

Newcastle United are aiming to sign Arsenal midfielder Joe Willock on loan until the end of the season, The Daily Mail reports.

Arsenal have reportedly proposed a part-exchange deal to sign Emiliano Buendia from Norwich City this month.

Arsenal are scheduled to face Manchester City in tonight's League Cup quarter-final at the Emirates Stadium.

Arsenal are scheduled to host Rapid Vienna in tonight's Europa League clash at the Emirates Stadium.

Arsenal are scheduled to face Molde on the road in tonight's Europa League clash. The Gunners have picked up the perfect tally of nine points after three group games and another victory will seal their round of 16 spot.

Arsenal are scheduled to face Portsmouth on the road in tonight's FA Cup fifth round tie.

Arsenal will make the trip to Athens to face Olympiacos in the first leg of their Europa League round of 32 tie.

Arsenal manager Mikel Arteta has admitted that he has concerns over the fitness of Lucas Torreira and Sead Kolasinac ahead of Saturday's Premier League meeting against Sheffield United at the Emirates Stadium.

Arsenal manager Unai Emery has confirmed that Granit Xhaka has been stripped from the captaincy following the unforeseen incident with the fans last month.

Arsenal make the trip to Merseyside to face Liverpool in the fourth round of the League Cup tonight.

Arsenal will be aiming to return to winning ways in the Premier League when they tackle Crystal Palace at the Emirates Stadium on Sunday.

Arsenal make the trip to Old Trafford for Monday's Premier League clash against Manchester United. The Gunners are winless in the past 12 league meetings at Old Trafford and they have an opportunity to break the unwanted streak against a United side, who are struggling with injuries to key players.

Arsenal can secure a third straight victory across all competitions when they entertain Nottingham Forest in the third round of the League Cup tonight.

Arsenal have confirmed that defender Rob Holding could make his first appearance of the season when the Gunners host Nottingham Forest in tomorrow's League Cup third round tie.

Arsenal have announced that young midfielder Joe Willock has been handed with a new long-term contract following his impressive showing for the club this season.