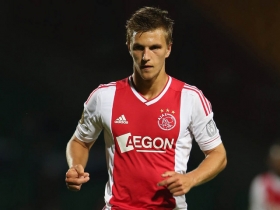 Ajax defender Perr Schuurs has dismissed the prospect of leaving the Dutch champions next month amid the reported interest from Liverpool.

Manchester City have reportedly begun talks with Tottenham Hotspur over the potential signing of right-back Kyle Walker during the summer transfer window.

Arsenal are reportedly set to have a bidding war with arch rivals Tottenham Hotspur for the signing of Ajax defender Joel Veltman this summer, according to The Metro.

Liverpool are reportedly readying a summer swoop for two of Ajax's emerging talents during the summer transfer window, according to CaughtOffside.

Feyenoord have suspended Graziano Pelle for two games and stripped the Italian of his captaincy of the club.