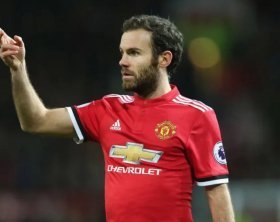 Manchester United will be aiming to register back-to-back wins at Old Trafford when they welcome Istanbul Basaksehir in the Champions League tonight.

Manchester United will be aiming to register back-to-back wins in the Premier League when they host West Bromwich Albion at Old Trafford tonight.

Manchester United attacker Juan Mata is prepared to pursue a fresh challenge away from the club amid the interest from Fenerbahce.

Manchester United are scheduled to face Norwich City on the road in tonight's FA Cup quarter-final. Ole Gunnar Solskjaer is set to make a number of changes to the starting lineup and Jesse Lingard could be one of those involved.

Former Newcastle United and Colombia striker Faustino Asprilla has suggested that fellow countryman James Rodriguez should move to England if he is to make the next step up in his career. Rodriguez has not shown the flashes of brilliance displayed in the 2014 World Cup since his transfer to Real Madrid, and looks set to depart his current club when the transfer window reopens.

Manchester United are set to face Derby County on the road in tonight's FA Cup fifth round tie.

Manchester United will tackle Club Brugge in the first leg of their Europa League round of 32 clash tonight.

Manchester United will make the trip to Stamford Bridge to face Chelsea in Monday's Premier League clash. The Red Devils are winless for three league games on the bounce but they will be hoping to end the run and enhance their Champions League prospects.

Jesse Lingard could reportedly head through the exit door during the summer transfer window amid interest from top European sides.

Manchester United are set to face Manchester City at the Etihad Stadium for the second leg of their League Cup semi-final tonight.

Manchester United manager Ole Gunnar Solskjaer has revealed that the club could be in the transfer market for one or two players this month.

Manchester United will be aiming to register back-to-back league wins for the first time this season when they face Manchester City on the road in tonight's derby clash.

Manchester United are scheduled to entertain Aston Villa at Old Trafford in this afternoon's Premier League clash. The Red Devils are winless in the past two games in all competitions and Ole Gunnar Solskjaer will be hoping for a strong response with the home advantage.

Manchester United boss Ole Gunnar Solskjaer has revealed that the likes of Scott McTominay and Paul Pogba are unlikely to make their injury comebacks for the next two weeks at the least.

England and Leicester City midfielder James Maddison is expected to put pen to paper on a new contract with the Foxes within the next two weeks, despite the ongoing interest of Man Utd and Chelsea. Maddison is regarded as one of England's best young prospects.

Manchester United are scheduled to host Liverpool in this weekend's much-anticipated Premier League clash. The Red Devils have made a dreadful beginning to the season with just nine points attained from eight matches and that sees them already five points behind the Champions League places.

Last week, MUFC's David de Gea has committed himself to Manchester United by signing a four-year contract extension. He is the highest paid member of the Manchester United squad, reportedly worth £350,000 a week – including an option to extend for a fifth season.

Manchester United midfielder Juan Mata has heaped praise on teammate Paul Pogba ahead of the Premier League showdown against Arsenal on Monday night.

Round number four was the last one before the break for EURO 2020 qualifiers which are played in this upcoming weekend. The previous week was truly amazing, especially the derby match played in London between Arsenal and Tottenham Hotspur. Liverpool FC and Manchester City have won their encounters easily and remained at the very top of the table.