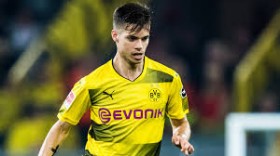 Wolves star Adama Traore’s shirt not have sponsor was down to ‘kit malfunction’ after printers forgot to press it on
target Julian Weigl joins Benfica in £20m transfer from Borussia Dortmund 'ANNOUNCE UMTITI' Arsenal fans go wild as...
02/01 11:56

Borussia Dortmund have reportedly told Arsenal that they would have to pay a sum of around &pound25m in order to secure the signature of Julian Weigl.

Manchester City have been told to pay £68m for Borussia Dortmund midfielder Julian Weigl, according to France Football.

Manchester United are reportedly monitoring the progress of Napoli midfielder Jorginho as they seek to secure a replacement for Michael Carrick.

After playing eight games this season in the Premier League, twenty players had featured for Manchester City as Pep Guardiola made full use of his talented squad of players. They certainly don’t seem to be lacking in strength and depth throughout all positions, so do they really need to strengthen in the January transfer window?