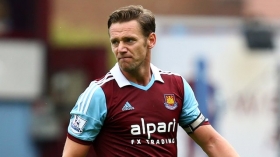 Former West Ham United midfielder Kevin Nolan is in line for a reunion with manager Sam Allardyce at Sunderland, according to reports.

Experienced midfielder Kevin Nolan has reportedly rejected a move to Ligue 1 side Lorient.

Experienced midfielder Kevin Nolan is in talks over a return to former club Bolton Wanderers, The Mirror reports.

Former West Ham United midfielder Kevin Nolan is understood to be training with League Two side Leyton Orient as he seeks to find a new club.

Sunderland boss Dick Advocaat is pondering over a move for free-agent Kevin Nolan, according to reports.

West Ham United have announced the departure of midfielder Kevin Nolan from the club by mutual consent.

West Ham signed Matty Taylor from Bolton on Saturday in a deal worth £3.2m. The midfielder agreed a three year contract and links up with former coach Sam Allardyce at Upton Park.

Newcastle boss Alan Pardew has revealed that there is still plenty of money left to spend on new players. Newcastle have already brought in Yohan Cabaye, Sylvain Marveux and Demba Ba this summer.

Newcastle captain Kevin Nolan has revealed Chris Hughton's final words to them all after his sudden and unexpected departure from the role.

Blackburn boss Paul Ince is keeping tabs on Bolton midfielder Kevin Nolan. It is rumoured that Inc ewill be making a January transfer move for the player in the region of £4 million.

Bolton midfielder Kevin Nolan has praised the club's fans after he believed their support helped lift the Trotters out of the Premiership relegation zone and to safety. Nolan is looking forward to another year in the Premiership.

Although Chelsea know Man Utd need to slip up in order for the Blues to stand any chance of a Premiership title; they have come on strong in the final half of the season and fully deserve the opportunity to take the title on the final day as they host Bolton at Stamford Bridge.

Joe Cole: we can beat Bolton

Chelsea midfielder Joe Cole is certain that the Blues can defeat Bolton in the crucial Premiership match on the final day of the season. A win for Chelsea and anything but a win for Man Utd would secure the Premiership title for the Blues.

Preview for match: Tottenham vs Bolton

Tottenham host Bolton at White Hart Lane on Saturday at 3pm, with Bolton desperate for a victory which would surely somehow rescue them from the Premiership drop. Tottenham have been out of sorts lately, and Juande Ramos is keen to try out young players for preparation for next year. Spurs signed Luka Modric this morning which signals Ramos' intent.

Nolan: my Bolton rant and rave

Bolton midfielder Kevin Nolan has revealed he ranted and raved at half time during the game against Middlesbrough at the Riverside that the Trotters managed a 1-0 victory in. Bolton were shocking throughout and were lucky to get a win.

Nolan hurt by demise of Bolton

Bolton midfielder Kevin Nolan is hurt by the demise of his club despite a win over West Ham; leaving the Trotters two points clear of safety in the bottom three of the Premiership.