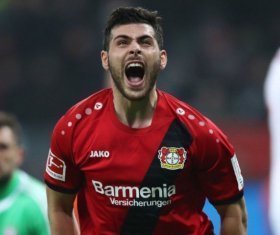 Florian Wirtz: Havertz comparisons wide of the mark for new Bayer Leverkusen star
the pitch. "But we have also lost important players. Kai Havertz went to Chelsea, Kevin Volland to Monaco. I think that our team spirit has
07/01 08:03

Arsenal to swoop for Bundesliga striker?

Arsenal manager Mikel Arteta is reportedly eyeing a mid-season deal for Bayer Leverkusen forward Kevin Volland as he looks to strengthen the club's prospects of finishing in the top four.

Kevin Volland has emerged as the primary transfer target for Arsenal manager Mikel Arteta this January, with the German international forward amongst the club's monitored players. Volland, who is currently playing for Bayer Leverkusen in the Bundesliga, has scored close to 40 goals in over 100 games for his side.

Premier League giants Liverpool will reportedly seek to lure Hoffenheim forward Kevin Holland to Anfield this summer. Reds boss Jurgen Klopp has been keeping track of the 23-year-old since his time at former club Borussia Dortmund.

Eredivisie star on his way to Man Utd?

Manchester United are reportedly open to making a summer move for Hoffenheim star Kevin Volland, as per The Mirror.

Hoffenheim winger Kevin Volland is currently being monitored by a host of Premier League club which include Arsenal, Chelsea, Liverpool, Manchester United and Tottenham Hotspur, who are believed to be in keen in acquiring his services in January.

Tottenham's extensive scouting network have been busy checking up on German forward Kevin Volland in recent months. The Hoffenheim striker has impressed since his recent progression to the German team's starting eleven.