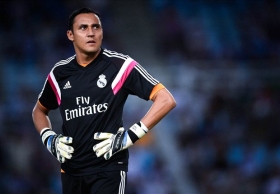 “We’ll be talking about him alongside Thierry Henry” – Jamie Carragher claims this Manchester City star has potential to be the best ever Premier League player
Keylor Navas in Paris Manchester City opted against PSG’s offer to sign Neymar In a noteworthy last summer transfer window development, ...
02/09 18:09

Fabian Ruiz to move from Napoli to PSG

Paris St Germain are to seal a move for Fabian Ruiz this weekend, with the Spanish midfielder signing a long term contract with the Ligue 1 champions. Ruiz has been with Napoli since 2018, and failed to agree a new contract with the Serie A club.

Paris Saint-Germain will make an attempt to sign goalkeeper David de Gea from Manchester United when the transfer window reopens.

Chelsea have identified two possible replacements for goalkeeper Kepa Arrizabalaga ahead of this summer's transfer window.

Real Madrid manager Zinedine Zidane has reportedly warned Thibaut Courtois regarding his poor form with Keylor Navas waiting in the wings to capitalise.

Arsenal have reportedly made a formal offer to acquire the signature of goalkeeper Keylor Navas from Real Madrid during the current transfer window.

Manchester City are reportedly looking at a surprise emergency loan move for Keylor Navas with Claudio Bravo expected to be sidelined for the long-term.