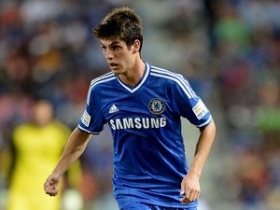 Lucas Piazon reveals disappointment over not joining Fulham from Chelsea
Former Chelsea star Lucas Piazon is still unhappy about how he was denied a permanent transfer to Fulham two years ago. The Brazilian was
22/01 05:40

Chelsea have confirmed the departure of Kenedy to Getafe on a season-long loan. The Brazil international had spent the past year and a half with Newcastle United and he has now taken up a fresh challenge in the Spanish La Liga.

Chelsea have confirmed the temporary departure of midfielder Lucas Piazon to Chievo for the remainder of the ongoing campaign.

Chelsea winger Lucas Piazon could reportedly be heading for a permanent exit from Stamford Bridge with Ligue 1 newcomers Reims keen on acquiring his services.

Fulham have announced the signing of Nice midfielder Jean-Michael Seri on a club-record deal of around £18m.

Lucas Piazon signs new Chelsea deal before being loaned out

Brazilian midfielder Lucas Piazon has extended his Chelsea contract until the summer of 2020. The 23-year-old will rejoin Championship club Fulham for a second successive loan stint.

Chelsea attacker Lucas Piazon has hinted that he could prolong his stay at Fulham beyond the expiry of his loan contract.The Brazilian joined the Cottagers on a temporary deal in the summer.

Premier League duo Arsenal and Everton are reportedly interested in making a move for Chelsea forward Lucas Piazon in January.

Chelsea's Brazilian wonderkid Lucas Piazon is set to follow the likes Patrick Van Aanholt and Gael Kakuta on loan to Eredivisie side Vitesse Arnhem this summer, according to sources in the Netherlands.

Premier League clubs Liverpool and Crystal Palace are both in the race to sign Chelsea's young Brazilian midfielder Lucas Piazon on loan. Chelsea are eager to let Piazon leave on loan this season to garner more first team experience.

Chelsea youngster Lucas Piazon has expressed his desire to stay in the Premier League next season and impress Jose Mourinho.

According to media reports, Liverpool are planning to bring Luzas Piazon to Anfield in a season long loan deal.