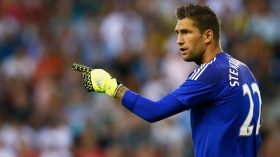 Everton have sealed the signing of talented Portuguese goalkeeper Joao Virginia from Premier League rivals Arsenal. It is understood that the Gunners have decided the shotstopper will not be a part of the club's long-term plans and have decided to let him leave for the Toffees in a deal worth a reported £4.4 million transfer deal.

Everton are reportedly mulling over an approach for Sunderland shot-stopper Jordan Pickford. The Toffees are expected to go on a spending spree this summer as they seek to progress further in the league.

Premier League duo Chelsea and Everton will go head-to-head for the services of Manchester City goalkeeper Joe Hart next summer. The England international is currently featuring for Torino on a season-long loan from the Citizens.

According to The Sun, Ronald Koeman is looking at 22-year-old Jordan Pickford as a long-term replacement for Maarten Stekelenburg.

Fraser Forster next on Koeman's radar

Everton boss Ronald Koeman is prepared to lodge a £15m bid for Southampton goalkeeper Fraser Forster. The England international was brought in from Celtic during Koeman's time at St.Mary's.

Everton are preparing a formal approach for Manchester City goalkeeper Joe Hart. The England international was left on the bench for the game against Sunderland.

Chelsea are prepared to offer the likes of Asmir Begovic and Loic Remy as part of an agreement to sign Everton star Romelu Lukaku. The 23-year-old is desperate to join a top European club this summer.

Everton to swoop for Rui Patricio?

Everton are preparing a potential bid for Sporting Lisbon goalkeeper Rui Patricio. The 28-year-old was highly influential for Portugal during their Euro 2016 triumph earlier this month.

Everton have wrapped up the signing of Fulham goalkeeper Maarten Stekelenburg for an undisclosed fee. The Netherlands international has penned a three-year contract at Goodison Park.

Southampton have signed Fulham goalkeeper Maarten Stekelenburg on a season-long loan deal, according to reports.

Southampton are interested in signing up out-of-favour Fulham goalkeeper Maarten Stekelenburg on a temporary deal this summer.

French club Monaco have wrapped up a deal for Dutch goalkeeper Maarten Stekelenburg on loan for the upcoming campaign. The shot stopper has been told he can leave Fulham for the next 12 months.

Crystal Palace manager Tony Pulis has contacted Fulham regarding the availability of Dutch goalkeeper Maarten Stekelenburg. The shot stopper has indicated that he wants to quit the Cottagers.

Crystal Palace goalkeeper Julian Speroni will put pen to paper on a new contract at the Eagles in the coming weeks. The shot stopper is to sign a new deal ending weeks of speculation.

Wrexham goalkeeper Joslain Mayebi is a surprise target for Fulham. The Cameroon international goalkeeper has been linked with a move to the Premier League in the January transfer window.

Fulham's manager Martin Jol wants to sign a few more players despite bringing in Derek Boateng, Maarten Stekelenburg and Fernando Amorebieta. It is understood Fulham are hoping to sign a forward and a defender.

Despite Fulham manager Martin Jol having already completed moves to sign Fernando Amorebieta, Maarten Stekelenburg and Derek Boateng this summer, there could be room to bring in a few more players as well.

Fulham have finally agreed a transfer for Dutch international goalkeeper Maarten Stekelenburg. The player moves to the Cottagers from Italian side Roma, signing a 4 year contract.