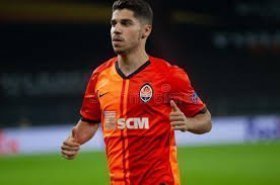 JUSTIN TIME Fulham ‘in Justin Kluivert transfer talks’ after son of Dutch legend Patrick was left out of Roma’s summer training camp
while Manor Solomon has signed on a season-long loan. Former Chelsea and Arsenal winger Willian has also been linked with a shock move to
05/08 14:07

Arsenal have reportedly earmarked Shakhtar Donetsk winger Manor Solomon as a potential addition to their squad next summer.