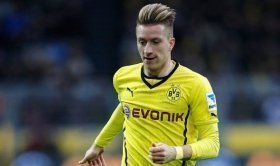 Arsenal have reportedly cooled their interest in Lyon midfielder Houssem Aouar ahead of the January transfer window.

Arsenal are reportedly looking into a January move for Julian Brandt as they aim to improve their creativity in the final third.

Borussia Dortmund forward Marco Reus has praised the development of Jadon Sancho. The young England starlet has been in inspired form for Dortmund so far this season, leaving the winger as top of the European assist charts.

Germany head coach Joachim Loew has stressed that Mesut Ozil still has a key role to play at the World Cup despite being dropped to the bench for the comeback win over Sweden.

Tottenham Hotspur are preparing to strengthen their squad this summer as they aim to make the next step up in the Premier League and take the trophy to their new stadium. Whilst keeping their current crop of star players is crucial, reports today suggest that German star Marco Reus is also being targeted by Mauricio Pochettino's side.

Premier League duo Arsenal and Manchester United could reportedly battle it out for the services of Borussia Dortmund attacker Marco Reus.

Pierre-Emerick Aubameyang has completed a move from Borussia Dortmund to Ligue 1 side Paris Saint-Germain for a reported fee of £61 million. The Gabonese striker will receive a £5 million signing on fee and will receive £8.75 million per year.