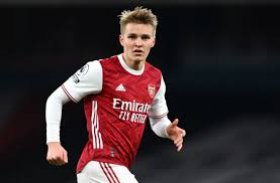 Arsenal transfer news: Mikel Arteta gives verdict on permanent Martin Odegaard move
secure a permanent transfer away from Madrid if he feels first-team opportunities will be hard to come by again next term. Arsenal would no
23/02 09:00

Arsenal to open talks with Real Madrid for Odegaard?

Arsenal are likely to negotiate a possible extension for Martin Odegaard from Real Madrid this summer.

Real Madrid are reportedly open to the permanent sale of Martin Odegaard, who is currently on loan with Arsenal.

Arsenal are scheduled to host Leeds United in the Premier League on Sunday.

Arsenal reportedly failed with an approach to sign Riqui Puig from Barcelona during the January transfer window.

Real Madrid attacker Martin Odegaard is open to joining Arsenal on a permanent basis during this summer's transfer window.

Spanish journalist Guillem Balague has said that Arsenal have zero chance of signing Martin Odegaard on a permanent deal in the summer.

Newcastle United have completed the signing of Joe Willock on a short-term loan deal from Arsenal.

Arsenal will make a fresh attempt to sign Joan Jordan during next summer's transfer window.

Arsenal don't have any interest in Bundesliga star

Arsenal have officially confirmed the arrival of Martin Odegaard on a short-term loan from Real Madrid.

Real Madrid attacker Martin Odegaard has had a successful medical ahead of his short-term loan move to Arsenal.

Arsenal are prepared to wait until the summer before making a renewed approach to sign Norwich City attacker Emiliano Buendia.

Arsenal defender to terminate his contract this month?

Arsenal defender Shkodran Mustafi is reportedly considering the option of terminating his contract with the club.

Arsenal have finally reached an agreement to sign Real Madrid attacker Martin Odegaard on loan for the rest of the season.

Arsenal manager Mikel Arteta has provided an update on the speculation linking Martin Odegaard with a move to the club.

Is Odegaard the successor for Ozil?

Arsenal are on the cusp of completing a deal for Real Madrid midfielder Martin Odegaard, with the Norwegian set to complete a loan deal. Odegaard is seen as a replacement for Mesut Ozil.

Arsenal manager Mikel Arteta has said that the club may focus on new signings after sanctioning the temporary and permanent exit of unwanted players.

Real Madrid are unwilling to consider the permanent sale of Martin Odegaard, who could join Arsenal on loan in the coming days.