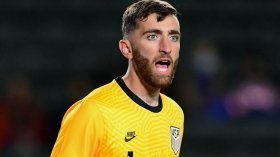 Yunus Musah impressed by Arsenal star Matt Turner’s World Cup display
... , which shows that the American has hugely benefitted from moving to the Emirates. Musah, who spent seven years as an Arsenal player before ...
26/11 06:53

Arsenal have the opportunity to reclaim the top spot in the Premier League when they host Nottingham Forest this afternoon.

Chelsea to loan out Gabriel Slonina?

Chelsea are prepared to loan out new goalkeeper Gabriel Slonina during the January transfer window, according to Standard Sport.

Arsenal may not make any more signings

Arsenal may not make any more signings before the transfer window closes, according to The Sun.

Arsenal manager Mikel Arteta has hinted that the club have not concluded their transfer business for the summer.

Arsenal will be aiming to secure a third-straight Premier League win when they face Bournemouth away from home today.

Arsenal have the opportunity to sign Leicester City midfielder Youri Tielemans on a cut-price deal.

Arsenal make another offer for Tielemans

According to journalist David Ornstein, the Gunners have made a final offer for Youri Tielemans. Arsenal are looking to sign further midfield reinforcements despite a busy summer.

Arsenal have reached an agreement with Fulham for the sale of goalkeeper Bernd Leno, The Athletic report.