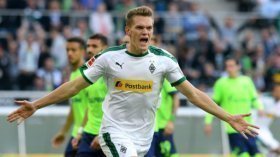 Chelsea Interested in Germany International Matthias Ginter
and in attack." If the Gladbach player does end up at Stamford Bridge he will become the third player that Chelsea have recruited from the
01/11 15:06

Chelsea may make a fresh attempt to sign Matthias Ginter from Borussia Monchengladbach when the transfer window reopens in January.

Matthias Ginter has confirmed that Chelsea have made an approach to sign him, but he has no plans of leaving Borussia Monchengladbach during this summer's transfer window.

North London giants Arsenal and Tottenham Hotspur could reportedly go on a bidding battle to sign Matthias Ginter from Borussia Monchengladbach this summer.

Arsenal are considering a surprise offer for Jonny Evans as they bid to resolve their defensive crisis. The Northern Irishman joined West Bromwich Albion from Manchester United last summer.

Arsenal are reported to have tabled lucrative offer for Borussia Dortmund defender Matthias Ginter. The German was in-and-out of the first-team under Thomas Tuchel last season.

Arsenal are lining up a potential offer for highly-rated German defender Matthias Ginter. The 22-year-old is currently plying his trade at Borussia Dortmund.

Red Devils' new manager Louis van Gaal has arrived at the club following the completion of the World Cup and is believed to be keen on adding a central defender.

Borussia Dortmund have completed the signing of German defender Matthias Ginter from Bundeliga club SC Freiburg on a five-year deal.

Germany coach Joachim Low has officially announced the 23 players who will be flying to Brazil to take part in the World Cup for the German national team. The side, who have waited 18 years to win an international accolade, are amongst the bookmakers favourites to secure World Cup success.

Manchester United are tracking the performances of Freiburg defender Matthias Ginter, with a view to a summer move for his services.

Man Utd are the latest club to show interest in Freiburg's talented defender Matthias Ginter. United are ready to battle Arsenal for the 19 year old.

Young Freiburg defender Matthias Ginter has been labeled the "new Per Mertesacker". Perhaps that is what persuaded Arsenal manager Arsene Wenger to pursue the 19-year-old for most of the summer. Whatever the future holds for Ginter, he is almost certain to be one of the best players of his generation.

Freiburg midfielder Matthias Ginter has cancelled out speculation linking him with a move to the Gunners insisting he is happy to ply his trade in the Bundesliga.

Bundesliga side Freiburg have insisted that their star midfielder Matthias Ginter is not for sale, whilst denying reports that the Gunners had made an offer for the defensive starlet.

Ginter has been consistently linked with a switch to the North London Club after a strong season in the Bundesliga, helping Freiburg finish in fifth place with a series of excellent displays in a holding midfield role. The German outfit have denied reports which had  suggested of a £6.1m bid made by Arsenal for the 19-year-old.

Arsenal close in on a transfer for Matthias Ginter?