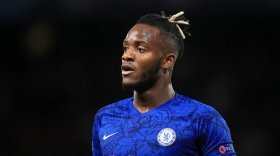 Serie A outfit Salernitana have expressed an interest in signing Chelsea striker Michy Batshuayi on loan.

28-year-old Belgium international forward Michy Batshuayi will finally leave Chelsea on a permanent basis this summer, after five separate loan spells away from Stamford Bridge failed to win the 6 foot 1 striker a permanent contract. Both Fenerbahce and Wolves will attempt to sign the forward for a nominal fee, believed to be in the region of £250,000.

Chelsea manager Thomas Tuchel has reportedly urged the club's hierarchy to recruit a new striker during the January transfer window.