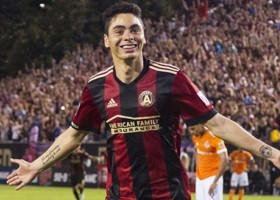 Newcastle forward Miguel Almiron makes classy gesture to help fight the coronavirus
closed their training ground in the midst of the outbreak, with no Premier League football set to be played until at least April...
25/03 18:46

Rafa Benitez: why Newcastle must match his ambition

Since Rafa Benitez took charge at Newcastle United, the Toon Army's form has drastically reversed; but with the Spaniard unhappy with lack of transfer activity, will he stay put?

Manchester United assistant coach Michael Carrick is reportedly the leading candidate to succeed Rafael Benitez as the next Newcastle United boss in the summer.

Newcastle United have reportedly step up their efforts to sign Atlanta United midfielder Miguel Almiron during the winter transfer window.

Newcastle United have reportedly joined the likes of Arsenal and Tottenham Hotspur in the race to sign Miguel Almiron from Atlanta United this winter.

West Ham United are deemed to have beaten the likes of Arsenal and Tottenham Hotspur in the race to sign Atlanta United playmaker Miguel Almiron in January.

Tottenham now lead Arsenal in chase for £22m Paraguayan No.10

Tottenham are in line to beat Arsenal to the signing of Atlanta United attacking midfielder Miguel Almiron, according to a report.

Arsenal have agreed a deal for Paraguay international Miguel Almiron in the January transfer window, with a reported fee of £11 million for the player having been confirmed. The highly-rated midfielder will join from Atlanta United from Major League Soccer in January.

Arsenal are said to have won the race to sign Paraguayan attacker Miguel Almiron from Atlanta United during the winter transfer window.