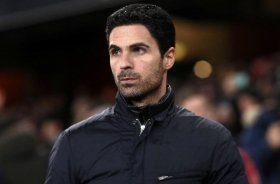 Pep Guardiola offers Man City team news as Mikel Arteta admission made
. Arteta has steered Arsenal to the top of the Premier League this season but returns to the Etihad for an FA Cup fourth round tie on ...
26/01 19:00

Arsenal manager Mikel Arteta has hinted that the club's business in the January transfer window may not yet be over, as he told reporters that the Gunners are still looking to sign a midfielder. With a bid for Weston McKennie falling through, Arsenal will look to other alternatives as Mohamed Elneny misses games through injury.

Arsenal are ready to beat Chelsea to the signing of Brighton & Hove Albion midfielder Moises Caicedo this summer.

Barcelona's top midfield target Martin Zubimendi would like to join Arsenal during the summer transfer window.

Arsenal have confirmed their second signing of the January transfer window with defender Jakub Kiwior arriving from Spezia.

West Ham United midfielder Declan Rice has his sights on joining Arsenal despite the long-term interest from Chelsea.

Arsenal are confident about their chances of signing Chelsea target Declan Rice in the summer, according to Evening Standard.

Arsenal are reportedly on the verge of landing Real Valladolid right-back Ivan Fresneda.

Arsenal are planning a fresh approach for Barcelona winger Raphinha, according to Spanish publication Marca.

Arsenal have opened talks to sign Real Valladolid's 18-year-old right back Ivan Fresneda, with a view to bringing in the player in the summer transfer window. Fresneda has only recently forced his way into the club's first-team squad, playing 9 times so far in La Liga this season.