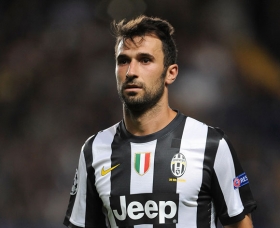 Arsenal are reportedly set to face a bidding war from Greek giants for the services of Juventus striker Mirko Vucinic this summer.

Arsenal are reportedly set to complete the signing of Juventus forward Mirko Vucinic on a temporary basis before the transfer deadline on Friday.

Inter Milan look set to win the race to sign 30-year-old striker Mirko Vucinic from Juventus. Arsenal had been linked with a move to sign the forward but the Gunners' manager Arsene Wenger ruled his team out of the race.

Arsenal poised to make their first signing this week?

Arsenal manager Arsene Wenger is understood to be readying a big-money deal to sign one of Europe's top-class talents in the next few days.

Tottenham star could be on his way to Juventus

Juventus have made Tottenham midfielder Erik lamela as their primary target this January. The Italian club are also willing to use Mirko Vucinic as part of any deal to land the Argentine.

Manchester United winger Nani and Bayern Munich Striker Mario Mandzukic are both being targeted by Juventus to bolster their attack.

Tottenham Hotspur have joined the race to acquire the services of Juventus forward Mirko Vucinic in the winter transfer window.

Arsenal have reportedly been asked to pay a fee of around £8m to secure the services of Juventus striker Mirko Vucinic in the winter transfer window.

Tottenham Hotspur are keen on securing the services of Juventus striker Mirko Vucinic during the January transfer window.

Juventus forward Mirko Vucinic is reportedly linked with a short-term move to Tottenham Hotspur in the winter transfer window.

Arsenal are closing in on the signing of Spanish striker Fernando Llorente from Serie A giants Juventus on a temporary basis during the winter transfer window.

Newcastle United have been linked with a move for Juventus striker Mirko during the winter transfer window.

Manchester United target Fabio Quagliarella can leave Juventus this January, according to reports. The 28 year old has fallen out of favour at the Serie A league leaders.

Mirko Vucinic's agent has ruled out talk of a move to Blackburn. The 27 year old Montenegrin striker is currently at Roma and would prefer to stay at the club.

Roma forward Mirko Vucinic is a target for Arsenal according to reports. The forward is reportedly being lined up to replace Emmanuel Adebayor, who quit for Man City two weeks ago.

There have been rumours circulating this morning that Mirko Vucinic is top of Paul Ince's summer transfer spending plans this summer, as the Blackburn boss looks set to lose some of his prized assets.

A late Zlatan Ibrahimovic brace gave Inter Milan their third successive Serie A title as they earned a 2-0 victory over Parma at the Enrico Tardini. The result confiremd Parma's relegation to Serie B, and Roma were unable to reach Inter at the top of Serie A.

Roma striker Mirko Vucinic is angry that Sir Alex Ferguson has already hinted he is looking ahead to the Champions League semi-finals, and warned United that Roma will be no pushover in the second leg at Old Trafford.

It's advantage Manchester United as they produced a tactical master class at the San Siro; defeating Roma 2-0 thanks to goals from the perfect pair Cristiano Ronaldo and Wayne Rooney. The goals both came from sublime counter attacks; and will set United well on their way to the Champions League semi-finals.