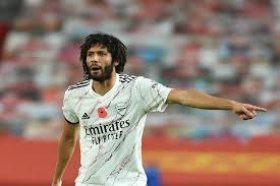 Granit Xhaka, Gabriel Martinelli, Mohamed Elneny - Arsenal injury news ahead of Crystal Palace
's Carabao Cup clash with AFC Wimbledon but he has not been seen in a Premier League matchday squad. However, with Xhaka out, he could be
16/10 05:00

Arsenal to miss out on re-signing former star?

Liverpool have reportedly informed Arsenal that they are unlikely to let Alex Oxlade-Chamberlain leave on the cheap.

Liverpool midfielder Alex Oxlade-Chamberlain has been linked with a potential return to Arsenal in January.

Arsenal to move for Napoli midfielder?

Arsenal could reportedly pursue the services of Napoli midfielder Fabian Ruiz next summer.

Albert Sambi Lokonga in line to start against Brighton

Arsenal are contemplating the purchase of a new midfielder in January after the injury setback for Granit Xhaka.

Arsenal have suffered a fresh injury blow with midfielder Granit Xhaka likely to be sidelined for at least six weeks.

Everton will renew their interest in signing Ainsley Maitland-Niles when the transfer window reopens at the turn of the year.

Arsenal will be without three players for the Premier League trip to Burnley on Saturday afternoon.

Arsenal will be without two players for tomorrow's Premier League clash against Norwich City at the Emirates Stadium.

Promising Arsenal midfielder could be recalled in January

Arsenal have the option of recalling Miguel Azeez from his ongoing loan stint at Portsmouth, football.london reports.

Arsenal declined the opportunity to sell midfielder Mohamed Elneny to Galatasaray, according to Sky Sports.

Arsenal have rejected the proposal from Galatasaray to sign midfielder Mohamed Elneny, according to Sky Sports.

Arsenal reportedly failed to sell Mohamed Elneny to Galatasaray due to the midfielder's hefty wage demands.