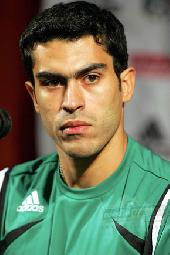 Roma have reportedly joined Real Betis in the queue to sign Manchester City's flop Nery Castillo. The Mexican striker is set to quit City after Mark Hughes told him he was surplus to requirements.

Man City striker Nery Castillo will be staying at the Citizens next year despite a half of a year left of his current loan deal. Castillo has been unable to play in the first team that often this year.

Middlesbrough put in a memorable 8-1 victory over Man City; it was an absolute dismal way for Sven-Goran Eriksson to end his tenure if, as expected, Thaksin Shinawatra gives the Swede his marching orders.

Man City and Everton have both proved to be serious challengers for Champions League qualification this season, and this match at the City of Manchester Stadium is sure to be a brilliant battle as Everton lie third in the form table.

Sven-Goran Eriksson has told Italian striker Rolando Bianchi that he can leave if he is not happy with the lack of playing time at Man City. Reggina and Parma have been linked with a move for the striker.

City to get Castillo

Man City look set to complete the signing of 23 year old Mexican striker Nery Castillo on loan for the season from Shakhtar Donetsk. The player was bought by the Ukrainians in the summer, but has fallen out of favour.

Man City are still being persistently linked to various strikers this summer. As earlier reported, Sven Goran Eriksson has stated that Man City are far from finished in the transfer market, especially after missing out on Nery Castillo.