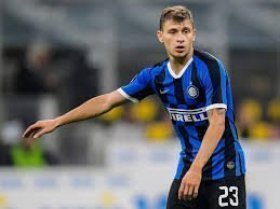 Arsenal keeping tabs on Manuel Locatelli at Euros as they line up transfer move
a three-man midfield, partnering Chelsea's Jorginho and Nicolo Barella of Inter Milan. And according to Sky Italia, Arsenal could have been
12/06 10:08

Manchester United and Liverpool are among the top Premier League clubs, who are monitoring the progress of Inter Milan midfielder Nicolo Barella.

Serie A giants Inter Milan are reportedly keen on landing the services of Nemanja Matic when the transfer window reopens in a couple of weeks' time.

Italian international midfielder Nicolo Barella is one of the brightest young prospects in Serie A, currently playing for Cagliari in Serie A, but expected to soon move elsewhere. The highly rated youngster has already appeared 7 times for Italy's national team, and is expected to fill the gap left by Italian great Andrea Pirlo.

Arsenal scout Serie A midfielder for a third time

Arsenal are understood to be keeping a close eye on Cagliari midfielder Nicolo Barella ahead of a potential move for his services in the summer.

Arsenal are reportedly said to face competition from Chelsea and Napoli in the race to sign Nicolo Barella from Cagliari at the end of the season.

Arsenal are reported to have scouted AC Milan attacker Suso for the second time in four weeks in order to evaluate his performances with the Serie A s ide.

Arsenal step up interest in Serie A midfielder

Arsenal have reportedly stepped up their interest in pursuing Nicolo Barella from Cagliari when the transfer window reopens at the end of the campaign.

Arsenal tracking the performance of Serie A duo

Arsenal are reportedly keeping tabs on the performances of Serie A duo Suso and Nicolo Barella with a view to a possible approach in the summer.

Cagliari midfielder Nicolo Barella is said to have the ambition of joining Manchester United and would find it hard to turn down their advances in the near future.

Chelsea have reportedly suffered a transfer blow with Inter Milan beating them to the signature of Nicolo Barella in the ongoing transfer window.

Zenit St Petersburg have reportedly told Chelsea to part with a sum of around £36m in order to secure the signature of Leandro Paredes this month.

Argentine midfielder Leandro Paredes could be on the cusp of joining Chelsea this month after dropping a huge transfer hint through his official Twitter account.

Chelsea have reportedly made contact with Paris Saint-Germain regarding the potential transfer of midfielder Adrien Rabiot this month.

Chelsea boss Maurizio Sarri has reportedly urged the club's hierarchy to pursue a move for Cagliari's Nicolo Barella when the transfer window reopens next month.

If reports in the media are anything to go by then Manchester United are interested in signing Italian international and Cagliari midfielder Nicolo Barella.

Cagliari starlet Nicola Barella is reportedly a target for Liverpool, with club manager Jurgen Klopp reportedly personally checking in on the player's progress. The 21-year-old is valued at around 15 million euros.