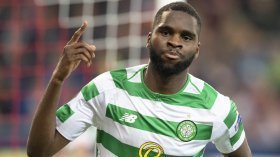 Southampton on the road in FA Cup third round
... of Saturday, January 7. The two sides have already met in Premier League action this season, Odsonne Edouard’s goal proving enough for ...
28/11 19:36

Arsenal could sanction the sale of Eddie Nketiah in January after his decision to turn down a new contract.

Arsenal manager Mikel Arteta has confirmed that Eddie Nketiah has rejected to sign a new contract beyond next summer.

Arsenal will be aiming to return to winning ways when they host Aston Villa in the Premier League tonight.

Arsenal are likely to keep Eddie Nketiah after Crystal Palace failed to negotiate a suitable fee for his services.

Leicester City have completed the transfer of Zambian striker Patson Daka, who scored 34 goals in all competitions for Red Bull Salzburg last season.

Leicester City beat Arsenal to the signing of Odsonne Edouard

Leicester City have won the race to sign Celtic striker Odsonne Edouard this summer, according to The Times.