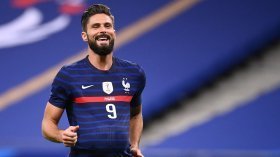 Calvert-Lewin will be praying Everton sign £25m Chelsea ace Hakim Ziyech
.” Ziyech struck up an excellent understanding with Olivier Giroud at Stamford Bridge . So much so that the 2018 World Cup winner admitted ...
25/01 22:00

Serie A giants AC Milan are looking into a future deal for Arsenal graduate Folarin Balogun, according to Calciomercato.

Chelsea star on his way to AC Milan in January

Chelsea star Hakim Ziyech will make the move to AC Milan when the transfer window reopens at the turn of the year.

AC Milan and Napoli have reportedly been offered the chance to sign Chelsea defender Malang Sarr on loan.

Chelsea manager Thomas Tuchel has reportedly urged the club's hierarchy to recruit a new striker during the January transfer window.