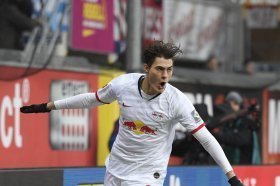 Manchester United have identified Patrik Schick as a potential target to bolster their attack this summer.

Everton are looking at the possibility of signing Roma defender Patrik Schick during this summer's transfer window.

Arsenal manager Unai Emery has confirmed that Danny Welbeck could be sidelined for a lengthy period after he underwent a surgery for a broken ankle.

Roma sporting director Monchi has dismissed suggestions that his side may look into a winter swap deal involving Aaron Ramsey which may witness Patrik Schick head to the Emirates on a short-term loan.

Roma are considering loaning out Patrik Schick in January for more playing time, according to reports. The Czech striker joined the Giallorossi from Sampdoria in 2017, in a complicated deal which could be worth up to €42m.

Roma have wrapped up a deal to sign Patrik Schick in a club record deal from Serie A rivals Sampdoria. The player has moved to Roma in a 42 million euro transfer package.

Czech Republic international striker Patrik Schick is to seal a deal to join Juventus from Serie A rivals Sampdoria. The forward will sign a five-year contract in Turin.

Liverpool to go head to head with Juventus for Sampdoria starlet

Liverpool are interested in bringing Sampdoria forward Patrik Schick to the club but face an uphill task after Juventus also registered their interest in the player.